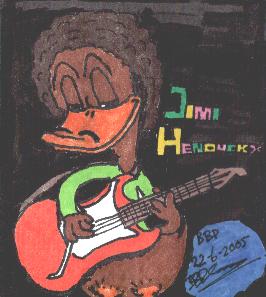 Ever since I was a little toddler, I'm a fan of Donald Duck. While browsing my huge Duck-magazine collection, I became charmed by the oil paintings by Harry Balm. He made pictures of all kinds of Duck-related art: book scenes, painting parodies, and celebrity Ducks.
The famous Ducks were grouped in the "Gallery of the Great". It contained parodies on important historical characters, like Henry VIII, Caligula and William the Silent, but also on artists like Beethoven, Mozart, and Rembrandt, and more popular people like Charlie Chaplin and Marilyn Monroe.
However I found it disturbing there were no musicians or composers from the twentieth century: no Stravinsky or John Cage, no Beatles or Rolling Stones, no John Coltrane or Chubby Checker. And NO Jimi Hendrix. "And that would be so easy," I thought. "Jimi Henduckx." And after chuckling a little, I discovered I found my next art project: Jimi Henduckx.
Jimi gave me a few problems. Would my fibre-pen colour the large section before it ran out? How to colour black hair on a black background? Where do I place the hair?
Eventually I found a good fibre-pen for the black section. I made Jimi's hair dark-brown. The lettering was taken from his Greatest Hits album, though it's too much "in perspective" by my taste. And even the hair placement went neatly.
But in my over-enthusiasm I missed a large fact. Jimi was left-handed, which I knew. But I used a mirrored image from a book as example, which I didn't realize as I was drawing. The result was several upset e-mails. I strongly apologize first of all: but secondly, it's not Jimi Hendrix. It's Jimi Henduckx, and he's ambidexter.
There are other Ducks with mistakes. Dweezil Quacka has hair tilted the wrong way, part of his beak is missing, his eyebrows merge with his face, and his eye-colour is wrong. I re-drew DQ in order to give it to the inspiration source. There's a photo of it, but that photo doesn't look very good. Also, I know Wes Montgomery had a moustache, Sebastiaan Schelfhout doesn't wear glasses, Henry Rollins has a lot more tattoos, Ruth's mallets are too small, all guitar heads look flat...etcetera. But there's nothing I can or will do to the drawings. Check out Wes with moustache and see how I messed up on correcting it.

As I am a Zappa fan, outside healthy proportions, Frank Quacka was the next idea.

Frank Quacka was easier said than done. I bumped into compositional problems. How to place the hair? Where do you place the infamous (and copy-righted) moustache combo? And how do you fit somebody who is tall and skinny into the body of somebody small and pear-shaped?
It took 5 attempts before I was sort of happy with the result. I copied it, so I could colour it without fear. The result upon scanning is not too good, as with every scan, but it's nice.
Then there was Yngwie Malmsteen. In Dutch, you'd just need to add a D to the end of his name to make a Ducky reference. But in English, I couldn't really come up with anything. Eventually I changed the subject's wonderful first name to Duckwie. Duckwie was finished before Frank 5, even though I started it after I had begun work on FQ.

There's a number of people I billed by popular request. Some because they have recently passed away, and I used a duck to pay tribute. Some non-guitar players were honoured. And some are just picked for their nice guitar.

By now, I've stopped making Duck drawings. It came down to a beak with matching hairdo, and a Fender Strat. It bored me. (Although I briefly relived this hobby by making Egg White, a parody on the magnificent guitar player who flirted with me during ZPZ.
Later I again briefly revived the Ducks for Adrian Billew.
The popularity of my ducks persisted, and in spite of my stated dislike for drawing more-of-the-same, I decided to make one more Duck. Not a musician this time: but a fictional character. My Rocky Horror Picture Show watching managed to warp my time and my mind enough to create the gorgeous Dr Frank-N-Feather. The first one has his expression based on the poster, but I don't like it very much: too undefined. On my re-vamp he looks more Frank: "I know what you want, and you're not going to get it, but I'll tease you a little while longer."

And later I made this lovely pastiche on The Scream. These are both sketches, and the full-blown version is not there yet, but to wet your appetite:

One day I made for my boyfriend, who loves my quackers and practices the noble fire-art of Poi and staff dance, this Poi duck.

Seeing a picture of Tim Curry as Alex in the A Clockwork Orange poster, inspired me to make A Duckwork Orange.

BACK TO ART
BACK TO HOME