For years I've been on indefinite hiatus with the Gallery of Great Guitarists. But somehow I kept drawing Ducks. It recently gave me the 40 Films idea, to make drawings after my favourite films.
One of these is Howl's Moving Castle, a film I fell so hopelessly in love with, it made me buy the Art Of HMC book, wear a Howl-style ring, play the beautiful score by Hisaishi and even study the Japanese language. It took me so long, nearly half a year: partly because I had another wicked idea and whipped up Grebriel Knight.

Aaaanyway...
Let's do this chronologically... 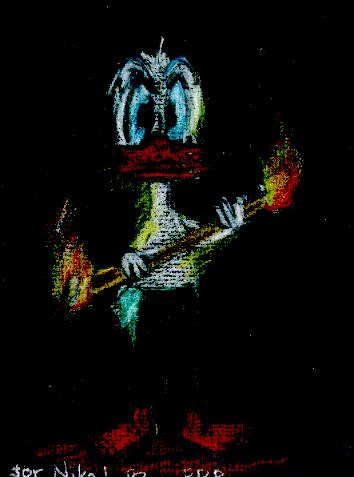 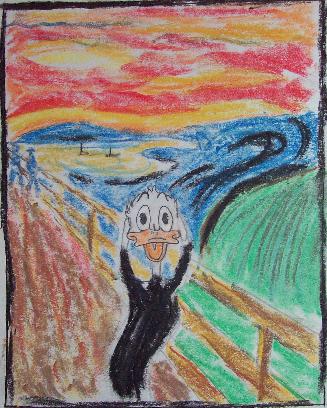 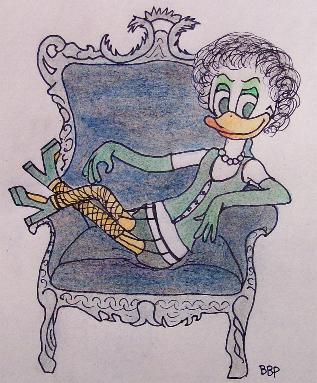 The first of the 40 Titles, made years before I started the project and should, along with the Howl's Moving Castle rant at the top of this page, be a substantial warning that one should not watch a film more than once. Frank-N-Feather was made after a few people were nagging at me to start drawing my ducky guitarists again. The first version didn't look too nice, but I love this one. Rule 50: Whenever there are two franchises, there will be a crossover. A revamped version, spiced up using GIMP and my tablet of my 2010 drawing A Duckwork Orange. Second in the 40 Titles series.

Well, I love Gabriel Knight... They were made in the order 3, 1, 2 in January and February 2013, using the graphic novel style that the series uses for its graphic novels and the cut scenes in Sins. Of Sins Of The Feathers, I had to use the main menu screen instead of the box cover: the hanged man was just too cruel. In all works I used memorable scenes: climbing the stairs in the book shop ("If you're trying to look down my shirt one more time, I'm leaving!"), luring the mime, the painting Gabriel has to sell, the hilarious tattoo painting scene and the nerve-wrecking mummy bit in chapter 9. The second game is to me just about Peter J. Lucas and the opera, but I needed some extra space to fill, so I picked the scene in the library between Grace and Gerde. Below the cover art is Ludwig outside a castle. This work has two easter eggs: the wolf in Ludwig's hair and the initials of some of my GK-fan-friends in the bookshelf. The third game links to the catfights between Grace and Madeline, Grace's everlasting treasure hunt, the infamous Cat Hair Moustache and the also very well-known Pendulum. Fowl's Moving Castle. It doesn't look like the work that went in it, but it still makes me smile!

BACK TO ART
BACK TO HOME